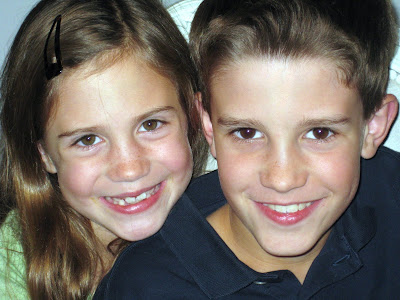 I love my kids. You know I do. It's just that I'm worried that they aren't shaping up to be very...well...nice.

The glances they give each other and the critical stuff that comes out of their mouths leave my mouth agape.

For instance, they are very much into tween fashion right now. Without Molly ever uttering a word, I can tell she feels superior to other little girls who haven't caught the fashion bug yet and who are still sporting Disney princess attire at age 8 or 9. This from the girl who wore the same pair of $2.48 capri pants from Target year round from when they were ankle long until they became shorts!

My kids, who have not yet discovered a love of food, judge their friends when they raid our snack drawer, sneak food from their parents, or take a huge piece of cake. If they were to put this judgment into words, I guess it would be a "lack of self-control" but instead, they just give each other "the look."

I think they have heard a lot about "childhood obesity" and want to avoid it at all costs. They have always been underweight, so this worries me for my kids and their health, but also for the way they react to others who are different. Trust me, fat kids on tv are still the butt of jokes, and my kids have picked up on it. Ask your child if he'd rather be obese or lose a hand in an accident. Just ask.

My kids judge kids for picking noses and eating, which is ironic considering my son once tried to convince us that boogers should be their own food group.

And they love babies and old people, except for when they don't. "Adorable," "sweet," and "kind" can instead be "smelly," "disgusting," and "gross."

What about whiners, tattle-tales and drama queens? Don't get my kids started.

And appearance? Today we were out and about Jake said, "I just don't know what I'd do if I had ugly kids." Molly gave him a sympathetic cluck cluck, looked him up and down and then said, "Well, I know MINE won't be ugly."

Molly is also experiencing a bit of friend drama. If a friend gets jealous or too needy, she feels uncomfortable and wants to write her off and pull away. I want her to like everyone, all the time, and be the all-inclusive (but not coke-sniffing) Julie McCoy of the 4th grade set.

All this Judgy-McJudgment, coupled with some smart alecky behavior toward me and their poor beleaguered dad, makes me wonder if it's time to pull the plug on the Disney channel or YouTube, or even the cafeteria table and recess, where I've heard that a lot of snarky convos take place.

But before I try to blame all of this on the media or someone else, I need to look closely at myself. The same girl drama neediness that drives Molly away? Makes me run for cover and stop answering my phone.

And while I don't (usually) judge kids for taking that too-big piece of cake, I know Tom and I have felt superior when our kids turn down their sweets and Halloween candy, therefore leaving me more to eat.

I have had a hard time empathizing with my friends when I feel some of their trauma and drama is self-inflicted by poor life choices. Sounds a little like I'm judging them for a "lack of self-control," doesn't it?

It's not as if my kids have no sense of charity. Just this week Molly wanted to have a lemonade and brownie sale for the earthquake victims in Japan. If it hadn't been for an accidental squirt of Dawn into the brownie batter, forcing me to eat the entire batch, we would have done it, too.

This morning we stopped by my dear friend's house to see how she's doing after cancer surgery, and the kids were loving and wonderful. And even though it is still spring, they are already planning ahead to next Christmas when they want to fill 20 boxes with toys for children through Samaritan's Purse.

But what about in their own backyard? The admonition to "Love Your Neighbor" comes into play here. The kids have an easier time loving "neighbors" who are a far away ideal or idea than a nitty-gritty in-your-face entity in their own neighborhood, class, or home.

I, too, am quick to raise money for kids in Africa, or spearhead a clothing collection drive,but I'm also the first one to go all Linda Blair on my poor husband for the grievous offenses of turning the light on while I'm trying to sleep or EATING CEREAL within my earshot. Isn't he my neighbor, too?

And the cashier at the grocery store today, with the visible razor stubble on her chin? Who kept repeating "Thank you, come again" the entire time she scanned my stuff? Was doing nothing wrong, but I wanted to brusquely tell her to leave me the heck alone so I could tear through an entire magazine of kitchen re-do's before my purchases were rung up.

I realize I am just as hateful and hypercritical as my kids are, but I have a more adult filter so I can get by without owning up to my critical spirit and doing something about it.

And the booger picking? When I was little I went to our middle-aged neighbors' house, knocked on their door, and self-righteously informed them with disdain: "Lisa (my sister) picks her boogers and eats them!"

Email ThisBlogThis!Share to TwitterShare to FacebookShare to Pinterest
Labels: I am a jerk, judgmental, kids; parenting

Oh boy, sounds like you're in the middle of a lot of thinking! I hope you're not really too upset about them - they sound totally normal, even NICER than normal, to me. You are so caring about yourself, and your kids, and I think that's just awesome...and I think a lot of other parents aren't really thinking about these issues so much. The fact that you are says something Anna. You're awesome - not hateful. Your kids sound lovely, not hateful - just normal. And having you and your husband as role models means that they will be okay. But, I must admit, seeing my kids get to this age is sort of terrifying, for all the reasons you stated! I'm going to enjoy our relatively easy challenges (not napping, tantrums, picky eaters, etc) while I can!

(PS - next time I see you remind to tell you about something related to this post that is too personal for the blogworld - I'm hoping to get together a girls dinner or lunch this summer. will shoot out the email soon.)

My son is super critical of anything that's popular. Something he accused me of years ago.

And Disney channel and Nick? Those sweet kids' networks make teachers into buffoons as well as stereotype kids.

Your kids sound normal to me! I'll bet you'd be super proud of them if you could be a fly on the wall throughout their day. Kids are always better when they are away from their parents. Seriously!

OMG do I relate here ... so so relate! My 8 year old has turned into a sassy little lady. And the 6 year old is so similar because she does everything her sister does ... in fact, we DID limit all TV to weekends only. And I took away most of the Disney shows because I think the girls are way too sassy and set a bad example.

We may be a year or two behind you ... but I so feel your pain. I know they're not always bad, but when they are it really feels awful.

That is the worst part of kids - the whole holding a mirror up to us thing. I was really enjoying mine until they started to develop into little people with not always nice habits. And hen I saw myself in those habits! Humbling, to say the least.

I think you have great kids. I have worries all over the place about my seven year old, so I can relate. I keep thinking that if we're thinking about this stuff and aware of it and talking to our kids, then that must be something. I hope.

Oh, Anna! I'm sorry to hear this. I am not yet a parent, so I have no point of reference, but I tend to agree with Heidi that if you are aware and thinking about this, you are on the right track. Good luck, however you choose to proceed. And thank you for sharing this very personal concern with us. It meant a lot to me to read it.

I'm already dealing with "unkindness" from the twins. They can say such cruel things that make me want to scream. To each other - to their brother - to their friends... "I don't like Riley anymore." "Ridah isn't invited to my birthday party." "I don't like curly hair - I only like straight hair." "That's boring." "I hate..." "You're not..."

With NO sense of remorse or empathy. It drives me crazy.

But they're only four - so I'm hoping that my explanations of why "that's not nice...hurts feelings...would make you sad if someone said that to you..." will eventually sink in. And I also remind myself that they're just trying out different roles. Exerting their control over the world. Who doesn't sometimes feel the siren song of being at the top looking down?

And they make me remember all the times that I said unkind things, created unnecessary drama, participated in rumor spreading...And I was an unusually nice child! So I guess they all do it - maybe even have to. If we were never weak and indulged in a moment of superiority - then we would feel awfully superior about it, wouldn't we?

I agree with Christy - they do sound like very nice and very normal kids.