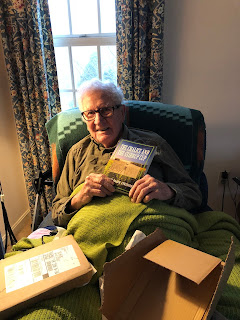 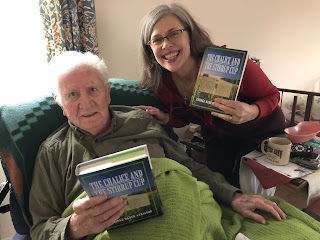 Thank you so much for introducing George Atkisson. I just ordered his book and rest assured I will greedily devour his every word and nuance. I just know that he adds so much color to his writings. Huge congratulations to Mr. George. And of course, I remain indebted to you, dear Anna, for sharing your Mr. George with your devout readers.

Mr. Atkisson, Congratulations on the release of your book, The Chalice and the Stirrup Cup. I wish you much success. Looking forward to reading it soon!
Best, Kolleen Kidd

That's way awesome! Can't wait to read it. Thanks for your part in his story and for the encouragement for all of us about self-publishing our own books "one day".

I'm SO happy to hear that his book was published! What a kind person you are to help him fulfill his lifelong dream.

Congratulations George! You did it! I can't wait to read your book. Happy (early) 95th birthday! Love, Trish

I have been following you a long while. I never leave comments, but needed to say thank you for doing this. My copy has been ordered.

I am so happy for him and how wonderful that you had a part in his dream.

I ordered a copy! Can't wait to read it! George, you inspire me!

What a wonderful story, and an amazing accomplishment! I just purchased the book, and am going to recommend at my next book club meeting. Congratulations George!

Anna, thanks for reminding us about the art of neighboring and introducing us to George. It’s inspiring and encouraging to me to know that he still has goals and dreams at 94! Congratulations to you, George, and all your helpers. I’ll order my copy from our local Vienna bookstore.

So happy for George!
I just put it on my Kindle.

This is the greatest story and one that we really need with our current state of the world. It brought tears to my eyes to see you holding your book Mr. George. Anna, you are simply AMAZING...thank you for adding one more thing to your plate to help him achieve his dreams and see his BOOK. Just can't believe what an uplifting story this is. Wish I didn't live in Minnesota because I would totally be begging to meet you two.

This is beyond wonderful in every way.
Providence.
Love.
You are a gift.

I love this story! Just when I was looking for something good to read this summer! Congrats to you both.

This is one of the loveliest stories I have read in a long time :) Congratulations on the achievement and becoming a published author to George! All the best from London.

I can't wait to give a copy of your book to my husband and another to my mother. There was only one hardback in stock so I ordered paperbacks. Congratulations on publishing your first book! Your story had me smiling at my computer screen. Thank you for showing us how you hold onto a dream and never give up! Enjoy your publishing party; you deserve to be celebrated. I hope Anna keeps telling us stories of her visits with you...or that you start a blog :)

What an amazing and beautiful story! Congratulations George and thank you Anna. It's not always easy to step out of our comfort zones but what a great lesson about the joy of taking chances. I ordered the book for my kindle and I can't wait to start reading it tonight. : )

I purchased a copy for my mom, an avid reader who enjoys religious stories, for Mother's Day. The fact that I could support a fellow aspiring author was just a bonus. I give you lots of credit for never stopping caring for others, despite how life has knocked you down. You said once something about how people need their pain acknowledged. I don't know if you need to have gone through hardship to realize that or not but it was a very valid point.

I had started writing a children's book on the free Amazon self-publishing site. It was about a girl with selective mutism, a condition I struggled with (though undiagnosed) as a child, and I had planned to give free copies to those who would benefit from it. But midway through I began to doubt my writing abilities and compare them to those of other, already published writers. The project became one of many I have begun but never finished. So kudos to George for never giving up on getting his book published. It is a heart-warming story and I am glad I could help spread word of his book.

The book sounds wonderful! Many kudos to George for following h is dream.

Howdy just wanted to give you a brief heads up and let you know a few
of the pictures aren't loading properly. I'm not sure why but I think its a linking issue.
I've tried it in two different web browsers and both show the same results.