I know some of you were hoping I'd have a rare bird moment in South Africa, so I am especially happy to share this story with you.

A few days into our trip, we were out on an afternoon game drive, looking for the elusive black rhino. I said to myself, to Jack, to God: "I need a rare bird. Something really cool, like a bird landing on our truck or something. But it can't be something Chris (our guide) will explain away, like, 'Oh, that happens every day around here.'"

Of course seeing any exotic animal was thrilling to us, but we could sense that Chris was more enthusiastic when he'd locate some animals rather than others. For instance, we were excited each time we saw zebras and warthogs (Pumba!) but Chris gave those more of a yawn because of what a common sight they were on the reserve.

Just a few minutes later, as we drove across a frighteningly narrow trail that dropped off into a pond, Chris stopped the truck short. He pointed out a bird in the tree right next to us. It was a smallish bird, and none of us would have noticed it if he hadn't said anything. He told us it was a Diederik Cuckoo that likely hadn't yet learned to fly.

He told us more. They are brood parasites, which mean they lay a single egg in another bird's nest. Once hatched, this bird tends to kill off any of the original offspring who really belong in the nest. Boo. That didn't seem to be very nice, but it was fascinating. I still hoped this bird was for me. After all, everyone says how terribly mean blue jays are, but I love them for all of the comfort they've brought us.

But was this bird rare or special enough to be my sign? I mean, it hadn't landed on our car, or my arm. It was just sitting in a tree.

Chris radioed his best buddy and fellow guide, Bernie, to bring her group right over. Bernie pulled up, equally excited, and started snapping photos with her enormous camera. As the official photographer of the reserve, she wanted to capture this bird while she had a chance.

After about 10 more minutes of observing the cuckoo, we pulled away. Chris turned back to us and said, "That was incredible. I see them flying occasionally, but I haven't had a chance to see one up close like this in a long time, maybe 8-10 years." 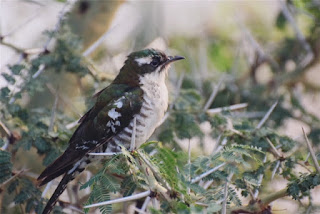 I seriously needed that today! God works in mysterious ways.... I've had a crap week & this made me smile for the first time this week. Thank you for sharing....you totally made my day!
xo

loooove this so, so much!!!

Yes, I would say that was your "rare bird".
As the kids would say, all the feels.

Thank you for sharing this, and perhaps not for the reason that it is helpful for some to read--to be reminded that our loves ones are still communicating with us--the point that hit me so hard and brought me immediately to tears was the concept that "you need to ask".
My mother died when I was young and I have no actual memory of her but I do know she is with me. As I finished reading your piece I was struck with such an overwhelming sense of how important it is that I talk to her and ask her for things. And not only her (which is harder really since I don't remember her...) but all the other loved ones I have who have passed. Thank you for reminding me to chat with them more often!
Julie

I love this story! Thank you so much for sharing. God is so good to give us signs of his love and the love of our family members in heaven. Blue butterflies are this for me with my niece, Anna. I sure hope her and Jack have met each other up there. :)

So special. Glad you guys got this moment. Jack was obviously on the trip with you.
Happy new year to your beautiful family.

Ah so beautiful
No other words
Mandy xx

Oh my heart. What a beautiful sign! Blessings to you.

Soo happy for that rare bird occurrence for y'all. He cares so personally for us all.

OMG what a wonderful perfect rare bird to see. <3

Well there you go, definitely a rare bird sighting and I would take that as a sign for sure!!