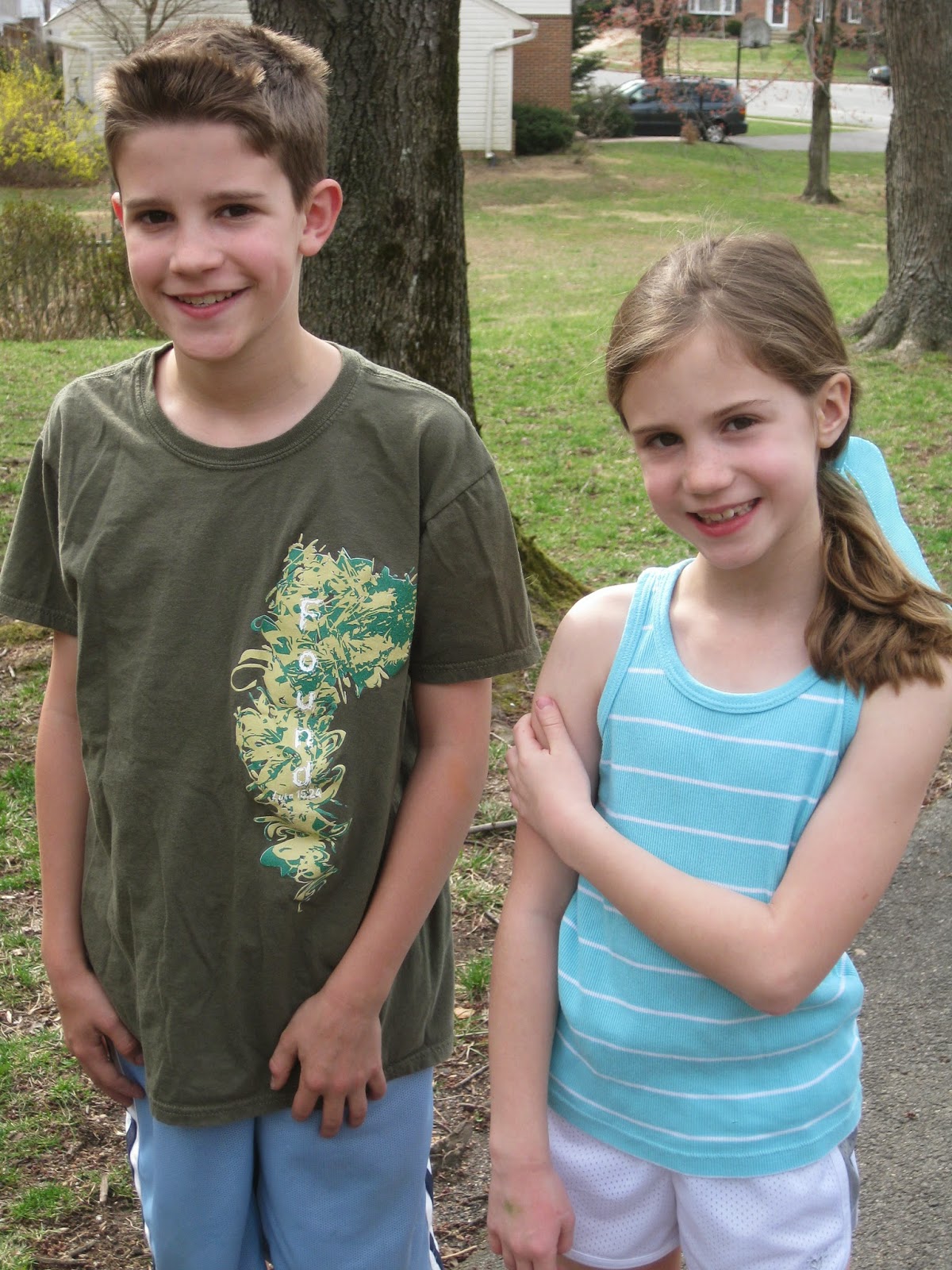 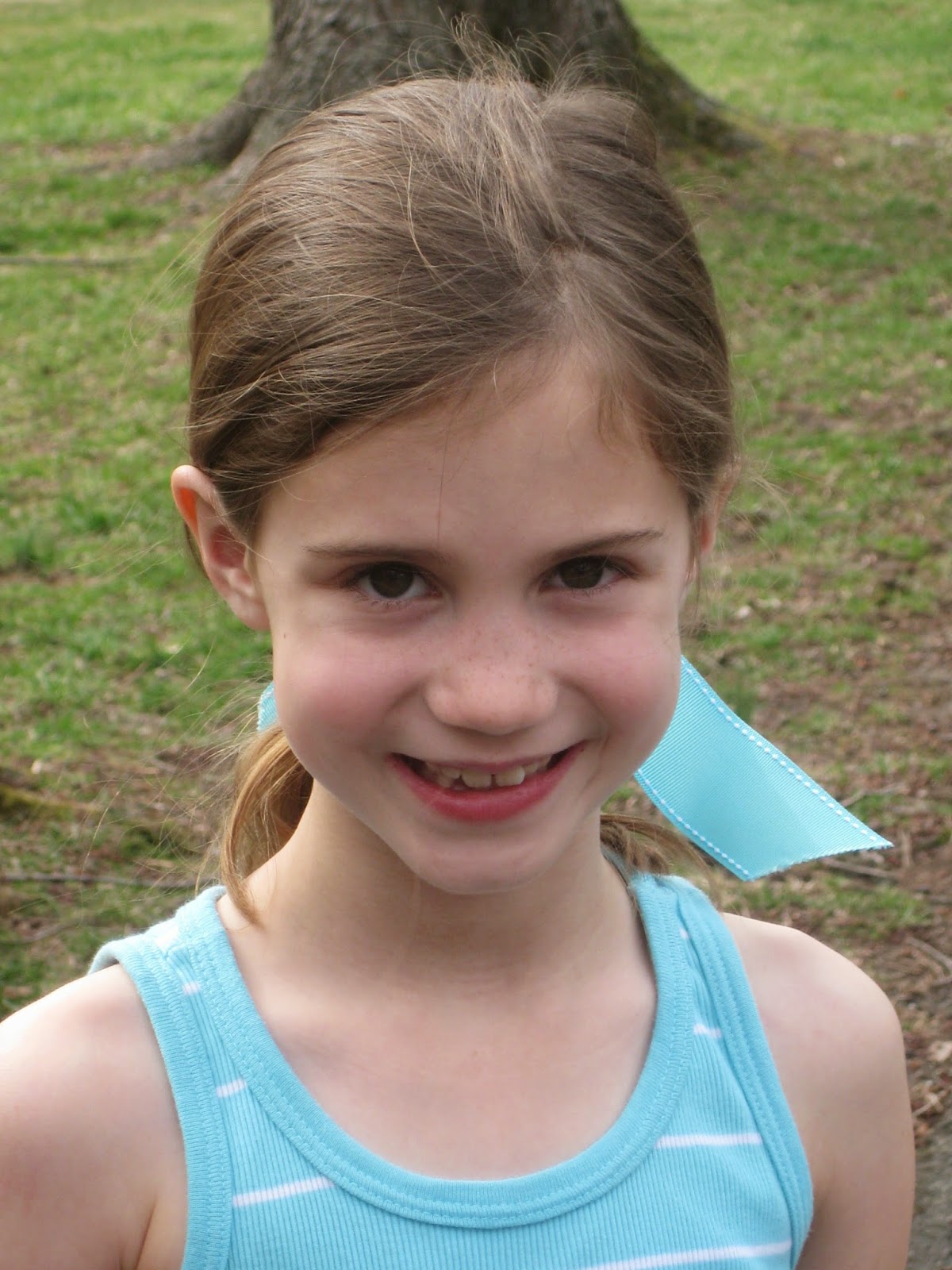 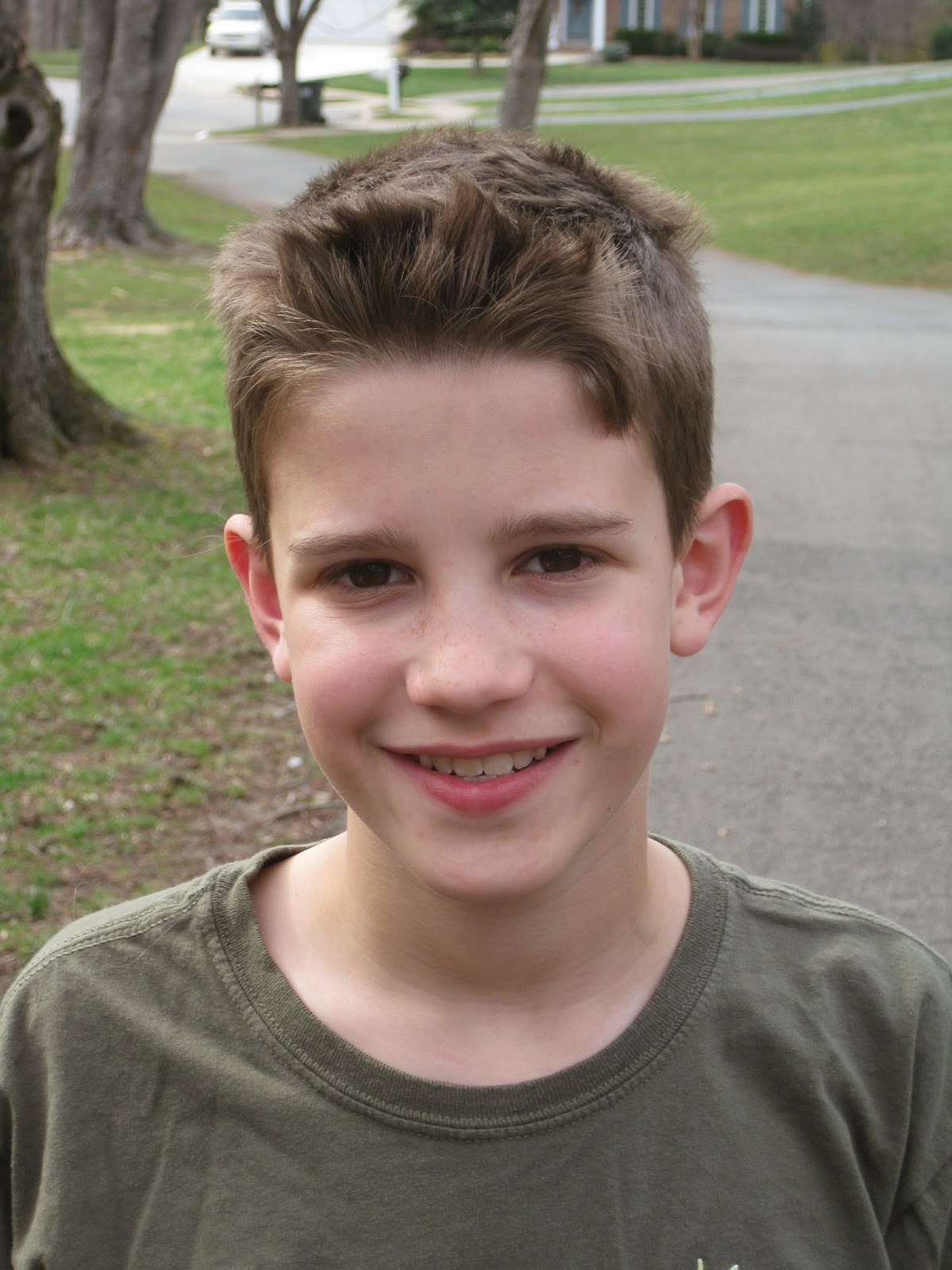 I see them standing in the ironwood tree next to the carport, feet resting on the thick, twisted branches as they face each other. No sports or errands crowd their agenda this spring morning, when their only job is to be kids. Our yard doesn’t have the huge climbing trees of my childhood, but a flowering cherry and Japanese dogwood in the front and this one on the side are good for a short climb, and apparently, snacking and talking. I can’t see what food they took up there. Scooby Doo fruit snacks, I’m guessing. 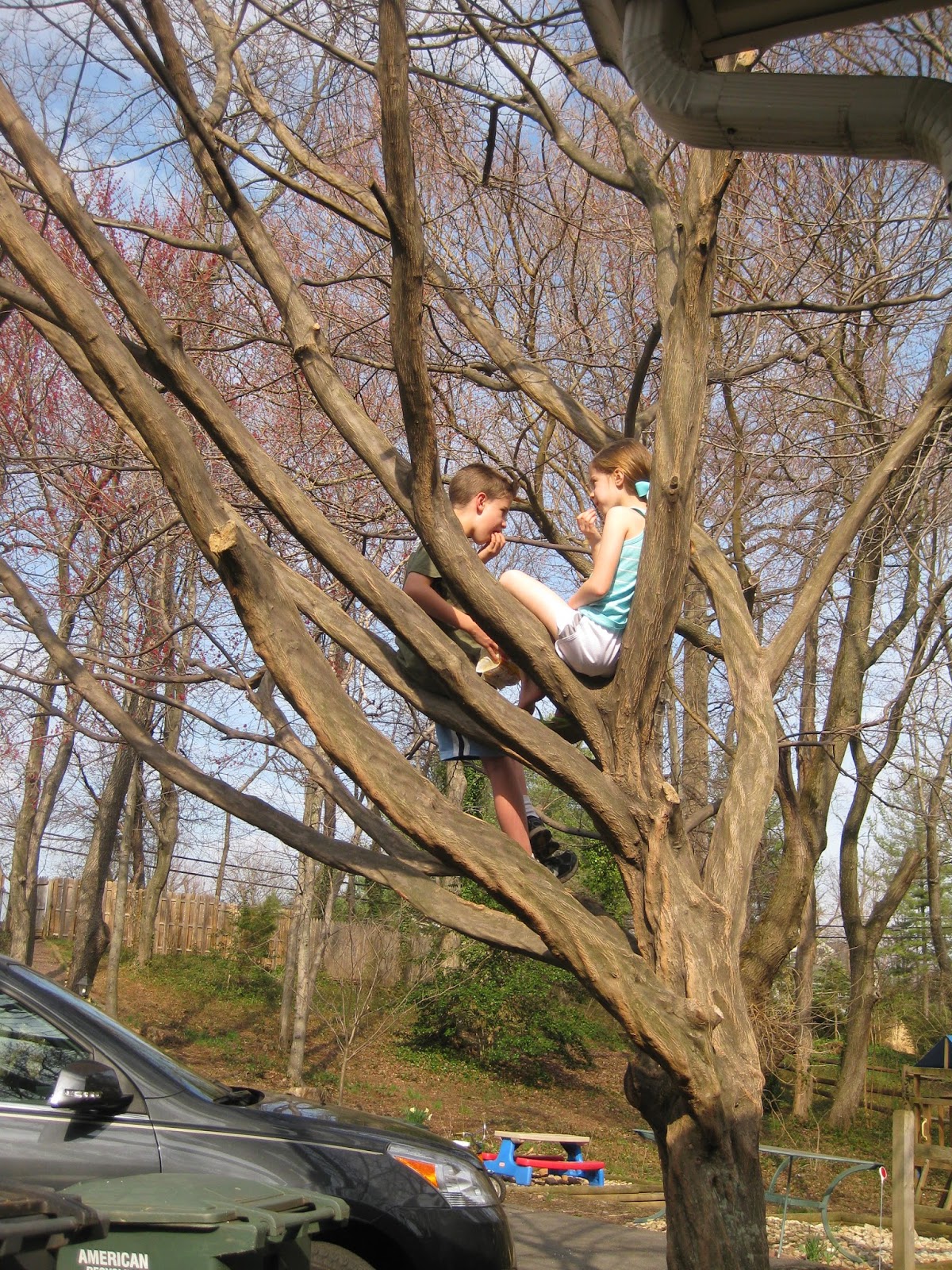 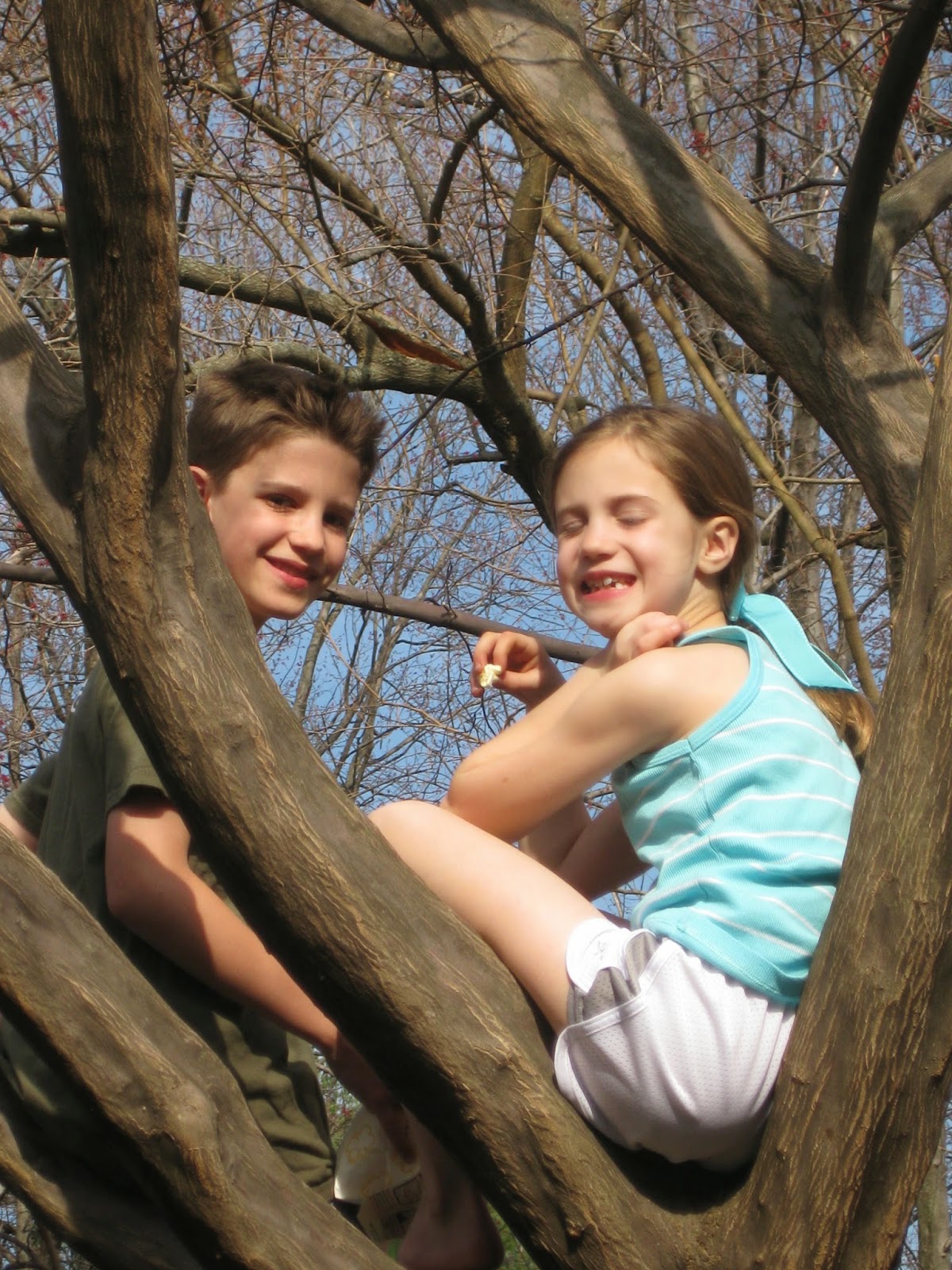 Are they discussing school next year, and that fact that Tim and I can’t seem to get our act together to commit to public verses private for Jack? They’re probably grateful they have each other to bemoan the fact that Tim and I can’t make a decision to save our lives.  Most likely their chat is about neighborhood  or school gossip, or Jack is telling Margaret something about his Lego video game, which she may or may not be following.


I remember when he kept the two of us in his room for  hours, coaching us on all of the weird character names from one of his games. We used mnemonic devices to remember, so we’d be ready when he quizzed us.


He always quizzed us.


Margaret and I can still recite the characters’ names: “Haikaru with hair of blue!” with an enthusiastic shout, even though it’s been years, and we had no real clue what he was talking about. Why have we always so willingly and enthusiastically fed into Jack’s interests, whether trains, legos, or word play?
Is it because eldest children set the agenda for a family?
I certainly remember wanting my older brother to include me in his world, to throw me a bone of attention, even though I wasn’t at all interested in fishing, burping,  sports, or setting things on fire. I was just interested in him.


Margaret wears an aqua tank top and shorts, a satiny blue ribbon holding back her long brown pony tail. Jack’s soft heather green t-shirt is way too big, but fortunately is long enough to cover the top of the athletic shorts he’s taken to pulling down past his butt. All his pertinent business is covered by the shirt, but it’s weird to know that if you lifted it up, his boxer shorts would show. Is this teenager-dom, come one year early? I’ve decided to let it go, except for teasing him about it occasionally. He spends most of his time tucked and belted into his uniform khakis anyway.


Both kids have a sprinkle of freckles  starting to show on their button noses. By October they’ll be faded until next year. I can’t take any credit for the provenance of those noses or the striking eyes, which lean toward amber for Margaret, and the deepest brown for Jack. Mine are blue, and my nose and face are something I had to grow into. I love how anyone who sees Jack and Margaret immediately knows they are brother and sister.


From their vantage point they can see down the long driveway, and any neighbor kids who come out of their houses will be able to spot them too. This tree perch could be a way to drum up a game of soccer in someone’s front yard, or refrigerator tag in our driveway, the wheeled trashcans serving as bases. Jack and Margaret are not phone callers or door knockers. They do not foist themselves on anyone, but wait to be approached.
They are sociable but on the introverted side. If no one calls, they remain content to stay at home, together. I understand the desire to make certain they are wanted, because I am like this too, but it stands in contrast to the more assertive kids whom I’ve encountered over the years. “Mrs. Donaldson, can Jack come out and play?” says a child at our kitchen door. “Well, he’s doing his homework right now,” I respond, gently inching the door closed. The child remains, faced pressed against the glass, just a few feet from our kitchen table. “It doesn’t look like he’s doing homework. It looks like he’s eating a snack.” We all crack up.


Like so many sibling conversations Jack and Margaret have had, today’s stays between them. Sometimes, even though their personalities are different, it seems as if they share a brain. A single word or a look and they erupt into hysterical laughter. They don’t have to worry about figuring out social cues or sugar coating things for each other, so connected are they by genes and culture and experience and security. Margaret knows she can be super blunt with Jack and he’ll take it, whether she's telling him he has too much gel in his hair or is wearing the wrong shirt. In fact, he usually welcomes it, considering her counsel to be wise, even though she’s barely 10 years old. Jack, on the other hand, has learned to couch any advice to her in more gentle terms, so as not to put her on the attack. He always starts with, “Well, Margaret…” and although he finally found his “R’s” years ago with the help of speech therapy, he still says his sister’s name in a distinctive way.
Sometimes they talk about the girls who have crushes on Jack. It’s fun to speculate about. I love that Margaret is already getting that easy exposure to boys through Jack that my sister and I did with our big brother, John. To us, boys were not some mysterious, foreign species. We knew they were more or less like us, just with smellier feet.

Already, Margaret is used to the pile of shoes the boys kick off when they dash into the house, heading down to video games or the basement. She has a comfortable rapport with her brother and his friends. Jack is her favorite, but it can’t be a bad thing having other boys around too, in and out all day with the slam of the kitchen door. And it goes both ways: Jack has been learning about how to understand women and their emotions ever since the day Margaret shook up his quiet life ten years ago. Email ThisBlogThis!Share to TwitterShare to FacebookShare to Pinterest
Labels: Can't believe it has been so long since that day, child loss, grief, kids, ordinary moments, siblings

Anna, you leave me speechless. I know the day will come, you will have it, of seeing them together, just like this, again.

So much love to you. Your posts leave me still.

Kim Bongiorno at Let Me Start By Saying said...

My kids are 22 months apart, my son older, my daughter younger. I love this story of your kids, this snapshot. These are the ones that stick in my head, too. These are the ordinary things I had hoped for.

Beautiful. I'm so glad that you're writing these memories down. Selfishly, I want to read them but it also means they're more... permanent. These special, ephemeral, precious snapshots. Thank you for sharing this with us!

Thanks for the reminder of how extraordinary the ordinary often turns out to be.

Oh, Anna. This took my breath away. Much love to you.

So much beauty in the ordinary. So much love. And your sharing of theirs is extraordinary.

This filled my heart and I don't know what else to say.

Those are precious connections and memories. Love you.

Holding you close in my heart and sending much love. Thank you for your beautiful writing and sharing those moments.

Hi Anna:
I wrote a piece for Narratively. I have not sent it to any one I know personally because it's just SO SO personal and I don't feel I want it getting back to my mother, but it might be interesting to you in terms of grief. It's NOT the bottomless searing grief you've experienced, by any means -- and it's not particularly similar to your experience in general -- but it's a type of grief I suppose. I've come to the conclusion that we are all tasked with the job of fighting off bitterness as we move into middle age. I really think it's all of us.

This just produced an achy, happy/sad sigh that I couldn't hold in. Beautiful portrait.

Occasionally I read things I hope I never forget. This post is one of those things.

Your kids are so beautiful. I love how well you know them, how well you remember moments that probably seemed ordinary at the time, and how much you love them.

Sometimes I have no words. But as always, sending you love and hugs!

He has your smile.

It's as if you were telling this like it was just yesterday. But it kind of was, wasn't it?

Your words conjure up beautiful images for us as well as recalling them for you. I can't help but think how much Margaret will treasure your words here. Jack is forever alive not only in your heart, but your words--where he gets swiftly deposited into our hearts, too.

Thank you as always for sharing your beautiful memories with us. xoxo

I recently finished "Rare Bird." It was beautiful. I can relate somewhat in that our oldest daughter contracted meningitis when she was 14 and in otherwise perfect health. She's now permanently disabled in a wheelchair and is nonverbal. Our grief is different from yours, yet the same in some ways because of lost dreams for our children. Thank you for your candor.

I love how your words flow so gently as you share this sweet story of Jack and Margaret. What a lovely memory to hold close in your heart.

Beautiful. The ordinary is perfect. These are the moments I cherish the most--not the goals scored or triumphs--just kids being kids and siblings enjoying one another on any ordinary day. As always, you remind it to cherish it. XO, Jen

This is wonderful! I found myself getting caught up in the stories of old photos of my kids this morning. I should write some of them down. Because, it's important to reflect on these things. Thanks for the reminder :)

I love watching my kids chat, and I enjoy knowing that they share things together. My brothers and I had some moments like that, too.

This morning in church the pastor shared what I have come to think of as "Jack's verse". Thought of you and your family. Thankful to know you through your blog.

I love that you can write about him without so much pain now. I hesitate to read your posts sometimes because of the pain it causes me, but I'm getting there. I'm one year behind you. Sometimes and can relate a story and just smile without crying. This was beautiful. Thank you.

Thinking of you today and always. Thank you for sharing this beautiful memory of their sibling love. Love you.