Where I Lived Wednesday 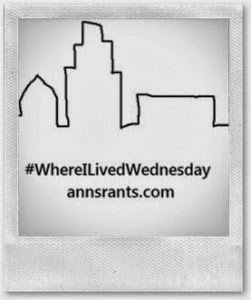 The big yellow farmhouse stood on an acre, surrounded by tall oak trees. The neighboring colonials and split levels may have had garbage disposals and pink toilets, patios and barbeque pits— things our house lacked-- but we had a hundred plus years of history, three big broad porches covered by a red tin roof, and an enormous yard that made it the perfect place to play. We had dense woods in the back for building forts, and the best climbing trees in the neighborhood, inexplicably named by us, “The Titanic,” and “The Three-Double Tree.” The woods housed a small pet graveyard, where gerbils and fish and poor Squeaky the squirrel were laid to rest. There was a forsythia bush so large my sister and I could climb inside it and play undetected.


The oval gravel driveway in front of the house was for playing two square-- you just dragged your sneaker through the rocks to mark off the boundaries.  The driveway was also, to our mother’s annoyance, a favorite place to drop our bikes on the way into the house. Although raised a proper southern lady, Mom was apt to throw around “shit” and “damn” which made us giggle. Common uses were, “I almost ran over those damn bikes again,” or, “Why the shit is that cat always under my feet?” as she tried to cook in our hot, un-airconditioned kitchen, bulky glasses sliding down her nose, papers and plants and food and chaos erupting around her.


One of our big side yards had a crop of bamboo to hide in, as well as a low spot that would flood every few years during rainstorms, a perfect place for sloshing around in rubber boots on a rainy day or floating an umbrella upside down like a boat. The other was for football games and freeze tag and late summer nights throwing tennis balls in the air, daring the bats to swoop down and scare us. Beside the big holly bush was a patch of grass so smooth and silky, so different from any other spot in the yard, that I would nestle there for a long time, looking up at the sky, stroking the grass with my fingers. I tried to find pictures in the clouds, but never did.


This is where we played a game with the low hanging branch of a huge oak tree. Three or four kids would pull the branch down, as close to the ground as possible. On “three!” they all would let go except the one who would get a ride, bouncing high in the air and hanging on for dear life. It was a favorite game until my sister Liz lost her grip and fell, landing hard on the roots below. She was in traction for two weeks, during which time I showed my true colors by being jealous of all the attention and gifts she received, and Mom and Dad eventually outlawed the tree game.


Sometimes we left the house in the morning and came back in at dinner. We traveled in packs. The neighbors had various signals to get their children home. Mr. Rooney would whistle in a distinctive way, and Mrs. Shenk would stand on the metal stoop outside her kitchen door and ring a little silver triangle. Margaret, my mother, would just yell, “Kids! Dinnertime!” and we were usually close enough to hear. If not, someone else would eventually send us on our way.


It’s not like Mom wasn’t around, but she didn’t hover. When we got old enough to play on our own, she was usually in the kitchen or working on a home project to try to keep the old house from falling down around our ears. Sometimes she would nap on the couch, an open magazine face down on her sizeable chest. Her smile was quick, her heart was huge, and neighborhood kids loved her, forming relationships that lasted even after the three of us were out of the house. Kids hung out at our house, because our mother wasn’t too strict, she didn’t get upset when we made a mess, and she was easy to talk to.


I remember once when a bunch of us went to her for counsel over some neighborhood squabble. After the other kids had gone home, Mom said in frustration, “I’m glad everyone likes playing here; I just wish sometimes they’d want to go somewhere else!” I was surprised to hear her say that. I got a rare, early glimpse that living in community could be annoying or messy. When I became a mom, dealing with the complicated act of being involved in others’ lives, sometimes I too would be tempted to draw inward and just stick with family. But that’s not the way my mother rolled, and I wanted to be just like her, minus the coke bottle glasses, of course. I always thought she'd be there to welcome me home.
Our lives centered around that big old house, the elementary school across the street, and our church on the other side of town.

That old house is still there.

We sold it 10 years after my mom died at age 46. I used to fantasize about raising my future children in that old house, walking them to elementary school and the pool down the street. I could picture it all so vividly. And when Jack and Margaret came along, I could put names, faces, and personalities to the fantasy.

Before our most recent move I contacted the owners, to see if they would be interested in selling, so that perhaps Margaret could go to my old high school, and fall asleep in my attic bedroom,  hearing the rain pound down on the slanted metal roof a few feet above her head. Maybe she would watch movies while soaking in the claw foot tub, the way I planned my Friday night bubble baths and Alberto V05 hot oil treatments around new episodes of Falcon Crest on a portable Black and White TV.

The owners are staying put for the time being.

The house is now blue.

Life has been strange, unexpected, and anything but safe.

But there's still a place in the back of my mind where I can picture being there again. Not with my mom. Not with little Jack and Margaret, or with teenage Margaret, but perhaps with grandkids sitting next to me, swinging and swatting away flies, on the wide front porch. 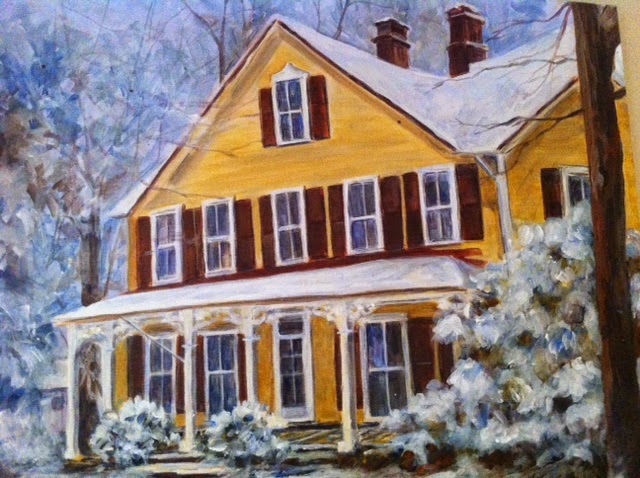 Email ThisBlogThis!Share to TwitterShare to FacebookShare to Pinterest
Labels: #whereilivedwednesday, memories, The house that built me, Where I lived Wednesday

I love that vision in the last paragraph--and can see it myself.

The whole post is evocative and wonderful. Thank you for playing, Anna!!

This made me cry. You're such a beautiful writer Anna. And this made me doubly glad we're buying an old farmhouse with an acre. I can only hope my kids will have the same kinds of memories you have. xoxo

Such a great house! I used to imagine living there when I walked home from Stenwood, long before I knew you! ~Beth

Beautiful post, Anna. I was only in that house once, for a field hockey party on my 15th birthday. It made such an impression on me that when it came time to buy a house of my own I fell in love with my own old house, in part because it reminded me of yours. Even when the upkeep of the place gets me down, I am never tempted to sell. It's such a special place and I want my son to grow up there with fond memories just like the ones you write so eloquently about.
xoxo
Maureen

I love this glimpse into where you grew up. Our house was pretty similar in size and age.

I didn't know your mom was a southern lady!

Oh I hope you make it back there one day!

Thanks so much for this post. It brings back many memories of the neighborhood, the big old house and the wonderful family who lived there.

Beautiful! It's like I was right there playing with you.

This was beautiful, Anna. Thank you for bringing us back to a glimpse of your childhood.

Your childhood home sounds magical. Your writing paints such a vivid picture that I felt transported to your neighborhood for a game of four square or freeze tag.

This might be my favorite post. Such a plentiful feast of images made me hear you and your sister knocking about outside and in. My brother and I found a secret "meadow" out in the woods of our backyard...the softest greenest grass. I still picture fairies living there.

My old childhood home is where I dream of almost weekly. It's where all the happy reunions took (take?) place. Yours sounds the same and those grandbabies of yours will love it someday once you figure out how to kick out the current owners. Then, please help me kick out mine?

My parents are moving out of my childhood home next week. I honestly don't know what I feel. Terrified, I guess, of never being able to go back there.

I loved this writing about your old home. Perhaps I should do my own...maybe it will help me to get a grip on my own emotions. :) Beautiful Anna!

We are talking grandkids here.
Can you believe that?
Grandkids ...
Are we not babies ourselves?
;)

What a gorgeous piece of writing! Long-time reader, and this may be my favorite you've written. Beautiful!

That childhood sounded magical! I was just telling my 83 year old Mom how thankful we lived in a small upstate New York town, and played outside all the time. Cant wait for your book. :)

What a great description of your childhood, Anna! I love that you asked the owners to sell. I hope they do, someday.