On the hottest day of the year, the summer after we lost Jack, my friend Cindy and I hang out at her house, spending time together while Margaret and Cindy’s kids are at Bible camp. She shows me around her beautiful yard with its stone retaining walls built by her husband, the fish pond, the new back deck, and the enormous shade trees.

Cindy tells me that she felt Jack’s presence the day before as she stood in her garden. I don't really know what this means, because it hasn't happened to me, so I ask for details.

"I can't really explain it, Anna, but I got the impression Jack was letting me know he was protecting our house."

I don't know what to say. Why would he protect her HOUSE, not her FAMILY? And protect it from WHAT?  A suburban summer? And isn't GOD the one who protects? Or maybe His angels? Cindy doesn’t know what it means either. We shrug and give each other a “What the heck?” face, as we have many times since Sept 8, realizing how little we understand about this life and the next. The mystery and surprises keep piling up, so what’s one more thing?

I go to pick up Margaret, and think nothing more of our conversation.

About five hours later, a freak thunderstorm storm called a Derecho rises suddenly in our region. It comes with very little warning, just like the fateful storm we’d had in September. In fact, Tim is out playing softball with his church league. They quickly call the game, and Tim has a frightening, dangerous drive home amid lightning, crackling power lines, and falling tree branches. Winds of 60-80 miles an hour tear through our region. Nearly 1 million people in the DC area will lose power tonight.

Cindy quickly returns from a neighborhood party just down the street as soon as the storm rises up. Her kids are by themselves, and she doesn't want them to be frightened if the power goes out. They hunker down.

Their next door neighbor, who had been in his driveway packing his car for a beach trip, stands on his front stoop to watch the crazy weather-- a brilliant show of lightning and hot, swirling wind. He hears movement at Cindy’s house and sees her enormous oak trees begin to pop, crack, and teeter in the wind. He sees them start falling directly toward Cindy’s house, then reverse and fall toward the street instead.

The wreckage includes downed trees with nearly 10 foot root balls reaching up toward the second story of her house, the beautiful stone walls knocked over and the irrigation system pulled up. From the street you can now barely see her house, and her yard looks nothing like the yard I'd seen at four that afternoon.

It will take several months, annoying insurance claims and many workmen to get Cindy's yard back in order. The only tree that hits the house is a smaller one from the neighbor’s yard that damages the garage roof.

The body of the house is completely untouched. Cindy and her kids are inside and will be unaware of the strange scene her neighbor witnesses until the next day when they compare storm stories.

Amidst the wreckage stands a small black lamppost, upright, untouched, and still tied with a royal blue “Jack ribbon” from the previous September. 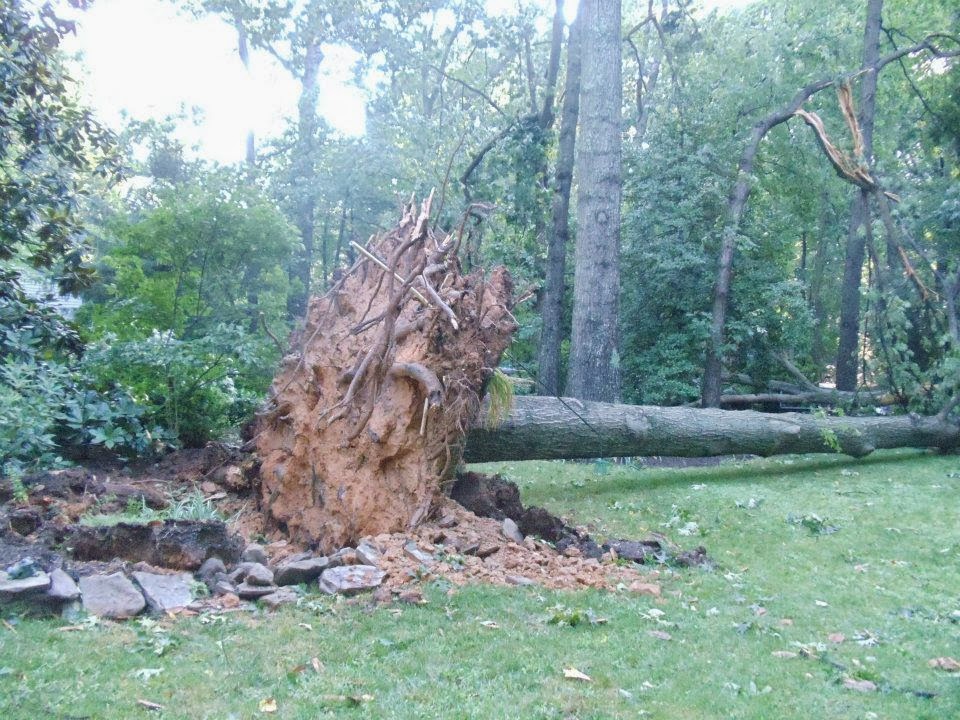 Look how close this one was to the house: 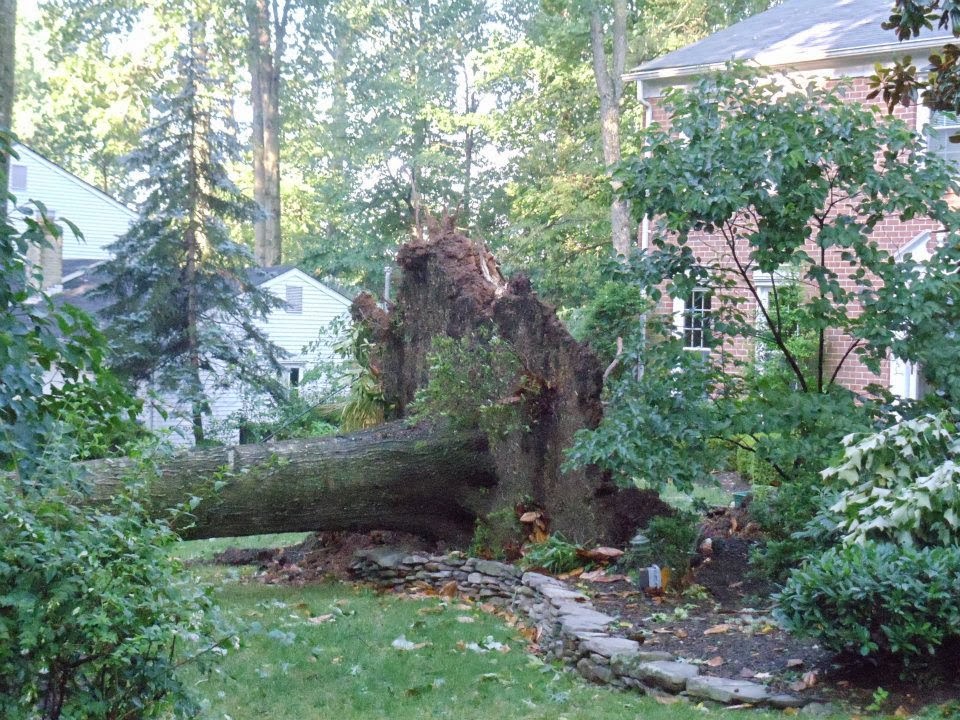 No longer a clear view of house from street because of all the trees and limbs down: 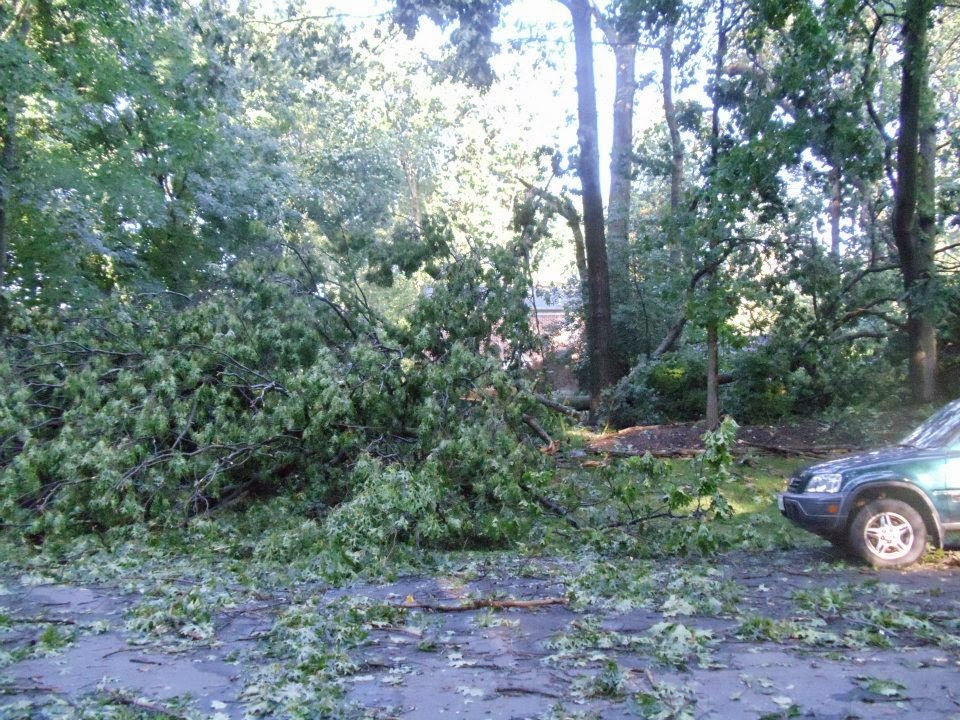 You can barely see the house. Cindy's husband is standing in front of garage. The lamp post is in the middle of the fallen trees on the left: 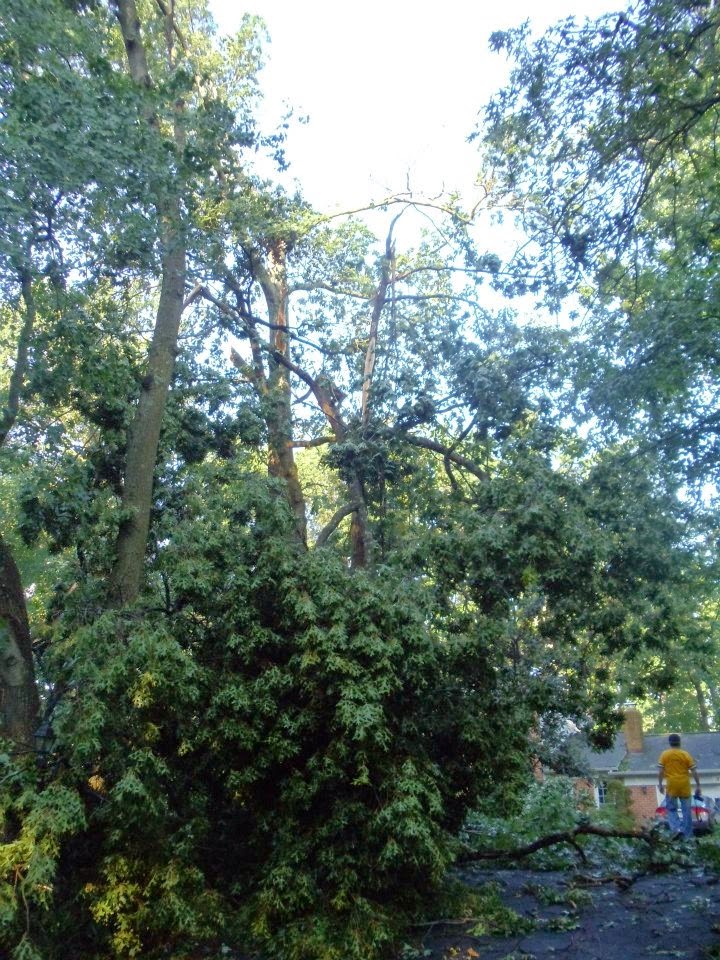 Oh my word. Why did you wait so long to share this story?

I love it. Have a blessed Resurrection day, my friend!

You bring wonder to my world. Thank you for these shares.

Great story! This suggests to me that God continues to use us, even when we are with him in Heaven. What a gift!!

That story still blows my mind...

I am absolutely speechless & in awe!

The pastor who gave the message at my brother's memorial service noted that the veil between heaven and earth is much more transparent than we recognize. I know her words to be true. Isn't it sooo Jack to pierce the veil to spare potential destruction of your friend's house?

Life is amazing. During my first marriage, just a few months after my grandmother passed away, a huge dragonfly alit on my dress, and my mom was sure it was my grandmother's spirit watching over me. I don't doubt it.

That is truly amazing and wonderful. Thank you for sharing, Anna.

This gave me chills. Thanks for sharing.

I love this story so much. Goosebumps!

This took my breath away, in a way I needed today.

I can't begin to fathom how all things work together...it is amazing. Sometimes horrible...and sometimes beautiful.

Thank you for sharing, as always.

Wow. Wow. What a blessing that her house stayed safe. Thank you for sharing this beautiful story.

She definitely felt Jack and no doubt he was protecting their home!
I can't believe the photos and that their house was untouched.

I read this at the right time. I love knowing Jack is around, that others feel and know it as well.

That gave me chills. What a story.

This is very beautiful.

I love these stories. Hope you tell them as often as you like. There was a time in my life when I thought everything was a coincidence but for at least a decade, I have increasingly felt that NOTHING is a coincidence. The world is so much richer and more meaningful to me now and I'm not worried about being labeled as a sentimental dumbass because I know what I know, I see what I see -- and I am a highly skeptical person (by nature and by training).

When people say, "why doesn't God just make him/herself known? make it obvious s/he is there?" I want to say, "But he/she does. Everywhere and at all times. The sunlight, the mundane grass, even the fingernail clippers. Every last little bit of plastic wrapping and speck of dirt. It's all God, not to mention the more obvious miracles of birth, growth, sun and moon. The question is actually why it's so hard for us (including me) to see it and recognize it most (or all) of the time." (But I never say this. I always just smile and shrug instead.)

Chills and holding my breath the whole time. xo

Oh my. This makes me cry. I'm one of those people that believe the ones we've lost are still with us. The earth is truly heaven (as in the meek shall inherit the earth), and it is not some far away place among the clouds. I know all about the divide, but still, I think that there are times that they can protect us, and this was one of those times.

What an awesome story. I still think about you each day and pray for comfort and strength.

This is an incredible story, and I also just enjoy hearing about your lifelong friendship with Cindy. It's not to compare or put a value on different kinds of friendships, but it can be wonderful to have people who've known us our whole lives.

amazing. holding back the tears.

Thank you for your posts; I've been thinking about you a lot lately because I have seen three different blue jays in the last three days. God bless you and keep you all.

Whew..I had the "what the heck is she talking about" face too. Until you mentioned the blue ribbon on the lamppost.

I remember seeing photos when these trees came in Cindy's yard, and marvelling at how nothing hit the house, but I didn't imagine Jack had a hand in keeping the house safe. What a beautiful story! xo

This is seriously blowing my mind. I think I continue to read your blog because usually when I read it I feel like there is no way NOT to believe in angels.

Umm...whoah. This is huge. That's a bigass tree. I have bigass chills. Love the exchange between you and your friend and the acceptance of acknowledging something that doesn't quite make sense at the time.

The night of my wedding a monster tree like the one that hit your friend's house annihilated my home. My elderly grandfather was inside at the time. It was dark when my bro got home and he didn't see it until morning when he described it as a "jungle of leaves and branches" inside our home. Nobody even told me about it until after we returned from our honeymoon. They knew I wouldn't have left. Those east coast trees don't mess around. So glad a beautiful boy was watching out for your friend.

Dr. Bernie Segal likes to say, "Coincidence is God's way of remaining anonymous." New to your blog and enjoy your writing. Thank you.

I remember when you posted this. We were in Annapolis when the storm came through. There was no warning. It was over 100* that day. We didn't hear a thing in the hotel and woke up to destruction and a steady stream of people trying to check into our hotel because they had no power and damaged homes. When we got back to NC we saw pine trees that had been completely in half (but they didn't break, weird).

I agree with Kendra, why did you wait so long?
No doubt her feelings about Jack's presence was right on. How awesome that the neighbor witnessed that and shared it with her. OMG on the lamp post still standing with Jack's ribbon on it. Wow!!!