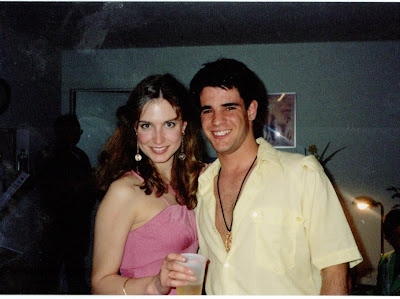 Flashback Friday. The past few Fridays I’ve been confessing what an easily annoyed jerk I am. This Friday I’m taking a break to remember simpler times, and share a picture that makes me giggle. Check out Flashback Friday posts by other bloggers here.

1n 1992 I was in grad school in North Carolina. I worked at Blockbuster and made $3.10 an hour plus all the movies I could rent— VHS of course. The extra .10 an hour was because I was a college graduate. Tom was an undergrad working in a lab. We were friends for a few months before we started dating, usually just meeting at my apartment for pizza, beer and 90210.

I remember arriving at a Halloween party with some friends and being greeted by 2 guys with ripped jeans wearing carved pumpkins on their heads. Upon seeing one particularly hairy set of legs through the rips, I remember thinking, “Whoa… those are some pretty hairy legs.” Little did I know, those legs would one day be mine. By the time Tom and I threw the groovy 70’s party pictured above, I was not only digging the hairy legs, but was falling hard for the rest of him too.

Back in those days, we did such sweet things for each other. I remember his knocking on my apartment window at 2 in the morning to deliver a surprise of Little Debbie Swiss Cake rolls while I studied. The mix tapes we played on impossibly large boom boxes. The home cooking. Sneaking kisses in the library. I did sweet things for him like picking all the pistachios out of his pudding when he had his wisdom teeth removed, and baking him a heart shaped cake for our 1 year “anniversary of dating.”

When this picture was taken, we had so few responsibilities. Although we had almost no money, we always seemed to have more than enough. We would extend ourselves for each other and keep no tally sheet. While in those days I would eagerly sit in a science lab with him waiting for his test-tubes to do whatever they were supposed to do just so we could be breathing the same air, today he sits on his computer upstairs, and I’m downstairs on mine.

So, as we enter this weekend of kids and sports and fundraisers and work, I’m going to remember that 21 and 22 year old and how much fun they had when this picture was taken. Digging through the Salvation Army bins for polyester pants and the perfect 70’s prom dress. Reserving my first (and only?) keg at the local dive bar. Speculating about whether a guest’s Member’s Only jacket was a costume or an unironic fashion choice. Doing the Hustle and wishing everyone else would leave so we could slow dance alone in all our double-knit glory…

This picture puts a smile on my face and makes me want to forget for a while the mortgage, the 2 adorable kids sleeping upstairs, and the barfing dog and remember what it was like to be young and right in the middle of falling in love.

Kind of makes me want to go grab Tom from upstairs, pop Jurassic Park in the (still working) VCR and open a Corona.

Aw, that's precious! There was nothing better than mix tapes. What do we do now-- playlists? It's just not the same.

You make my heart warm. And fill with many memories.

This is so sweet!

And, you STILL have a VCR?

Oh, what wonderful memories! I was actually thinking about that party recently when I was trying to remember or remind myself that I used to be a little bit fun, although my kids can't fathom it. Grab Tom and have a flashback (or better yet, Flashdance!) date.

I must admit I was tempted to stop and post a comment the second I read about your paltry income---come on Blockbuster even for 1992 $3.20 an hour is shameful!!!

It's fun to see that groovy old photo, Halloween parties always make for good photo ops. Proof I guess that you did indeed have a life before and after being my teacher. I think that teachers are sometimes like parents in that way, it is hard for kids to imagine them outside of the sphere in which their own lives are effected. In my mind you will always be in your twenties sitting at that sideways desk at the back of the classroom at GCM grading papers. Some of my favorite high school memories are from your classes. I guess that is my own flashback!

This is so incredibly adorable!