The Bridge: One Terrible Night 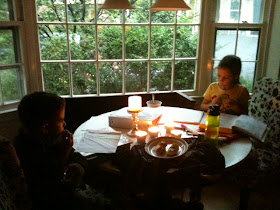 A few weeks ago I thought my biggest problem in the world was that I’d gained 10 lbs over the summer. I may have mentioned it to you here a time or three. But as you know, everything has changed:

We sat around the table doing homework by candlelight a la Little House on the Prairie. The electricity was out, and we were psyched. Driving home a few minutes earlier had been an adventure, as we made our way through flooded streets that looked like a river of chocolate milk. We saw our favorite tiny ponds overflowing their banks. We drove home a different way because we knew that the little bridge on the road outside of our development would be flooded, and it was.

We planned to make nachos for a snack, but with no power for the microwave, that was a no-go. I put out apple slices with peanut butter and we talked about how great school was going, particularly how excited Jack was about English, and Science, and Bible. This was promising news from the brand new world of Middle School!

The rain picked up and a knock came at the door. Friends, soaked, playing in the warm rain. Giggles all around, with a “Go for it!” from me and they were out the door. I don’t know how many times I’d told them of the crazy fun my sister and I had tromping through the flooded dips and valleys of our yard as kids, but I do know I had told them. Dear God, I wish I had never told them. My last sight of them was 5 soaked, happy kids, walking down our driveway toward the cul de sac, Jack, in his school uniform, doing a full spin with a huge smile on his face.

I crawled under the covers and by camping lantern read a magazine article about a family that left their affluent lives behind to live in an RV and serve the poor, city by city, in two month stretches. Could our family do something like that without killing each other? Not a chance, but I liked the fantasy, so I folded down the page to share at dinnertime.

Here’s the thing: I may have heard thunder at this point. You know those parenting moments when you let something go on too long against your better judgment, but you do it anyway? It could be a play date that quickly turns to crap just because you needed a little more adult time with the other mom, or a party you know you shouldn’t let your teenage daughter go to, but you are too tired and fed up to deal with any more drama, tears and arguing. So I might have heard thunder, but I didn’t listen.

I talked to my husband on the phone and said we might go out to dinner because the lights were out and all sports practices were canceled. But we decided traffic would be awful and we’d just forage from the fridge when he got home. So I let the kids stay out longer, later, until just after 6. After all, it was much lighter outside than in.

Then my husband called from the road and said he saw lightning, and I heard thunder in earnest, and went to get the kids. This meant getting in the car because I didn’t want to get soaked. What is fun for 10-12 year olds is not so much for 41 year olds. When I reached the cul de sac, they weren’t there. My daughter walked down the street toward me, having felt a strong urging that she should come home. I had her get in the car and asked where Jack was. “In Joe’s back yard,” was her reply.

Not a single thought of our neighborhood’s paltry little creek entered my mind at this point, only the danger of lightning, so I waited a few seconds wondering which gate I should use as I harrumphed about having to go out into the pouring rain. I walked down the steep, steep steps of the backyard that led to a normally anemic little creek of steep banks, rocky soil and a few inches of water. I had never been in this backyard before.

As I called Jack’s name, Joe’s mom leaned out the rear window of the house and said “Jack’s not down there with them.” I turned around and told her he was. Who knows how long this exchange took? 2 seconds? Three? More?

I could hear the peals of laughter of boys having fun down below, and I quickened my pace. I continued down to the bank where I saw just 2 boys, not 3. When I shouted, “Where is Jack?” They answered, laughing, “In the river!” In their shock, it must have looked funny to see him fall in and be swept away. For certain they were used to Jack making them laugh, and the mud and the rain and the playing were part of an afternoon that had truly felt like a celebration of sorts. Until it wasn’t.

Our crappy little creek was now a raging, raging river with walls of rushing water, and Jack was gone. How late was I? One second? 10? A minute? It could not have been more than that.

Shouting his name, running through underbrush, losing my flip-flops and holding up my soaked pants, I had the feeling that he was already gone. That NO ONE could have survived what I just saw. But I’m kind of like that. A defeatist, if that’s the word. I watched my own mother die in a hospital bed and never even said, “Turn away from the light! We want you to stay with us, dammit!” I’ve never been a fighter and have always just kind of felt like bad stuff happens, so why not to us?

But this was my CHILD, so my self-talk went something like, “Don’t give up, Anna! Do what other mothers would do. Don’t give up. Jesus help me, DON’T GIVE UP!” But truthfully, I couldn’t see how my 70 lb child could have survived even a few horrifying seconds in a current that was making 2000 lb cars bob along the roads.

Yelling for one neighbor to call 911 and another to look for Jack, I ran to the car and began driving. I had to get out of the neighborhood and down to a bridge, where I knew the rushing water led. Traffic was stopped because of the flooding. I drove the wrong way down a two lane road honking my horn at oncoming cars, and I got close, but I became fearful of our safety. I could feel my mommy-saving instincts folding up inside of myself as hopelessness set in and seconds ticked away, so I turned back, driving through a neighbor’s yard in order to turn around, leaving deep ruts that are there today. I didn’t think it would be many, many precious minutes before rescue workers could arrive.

Closed roads, no electricity, that fact that rescue workers couldn’t get there and weren’t familiar with the creek's name, one middle-aged cop sent to mosey up and ask me questions like my son’s name, our address, where he went in, and whether Jack could have been pretending, talk of a “500 year” or “1,000 year” or whoever-the-hell-cares-year flood of epic proportions. A fenced-in yard where for 7.5 years my kids had never, ever played, so the fact that it opened to a creek at the bottom was completely off my radar. A neighborhood creek that was such a non-issue for us that we’d never once warned the kids about it.

And the bridge. I tried to tell the workers to go to the bridge, yet I couldn’t even remember the name of the major road that we’ve lived off of for 8 years to explain what I meant. Neighbors ran along the banks, and some went in the water, endangering themselves to try to find Jack; Jack and Margaret’s friends watched in shock. Soaked through, I wondered what moms did in situations like this. Should I pull off my soggy yoga pants so I could run freely down the banks in my underwear without falling? Or was all of this just too, too crazy?

I held my friend’s hand and knelt cursing and praying on the grass. But I didn’t go in the water. I quit yelling. I went home to wait, just as the police told me to. I didn’t run to the bridge, where they found him 2 hours later in the murky darkness.

A night of shock and terror, made more macabre by police with flashlights inside our darkened house, and a sobbing little girl saying, “But I don’t want to be an only child!” Prayers and preachers and sobs and words like “identification” and “medical examiner” and “autopsy.” Friends holding us and sitting with us, and my sister driving through the night to be there. Sobbing to my husband 100 times saying,“I am so, so sorry! I am so, so sorry!” and not being able to stop.

There’s so much more to tell you, of news trucks crowding our street, of neighbors shielding us and carrying us, and of love, love, love pouring out from our friends, our family, our community, our God. Of miracles big and small. Of friendships strengthened and relationships renewed. Of the growing impact of one little boy’s life.

But those are not the stories for today. This is the horrible story that hurts to write and I know it hurts you to read. The story of going to a funeral home. Of deciding to see my son’s body. Of keening and screaming and running out the door, only to be greeted by a news camera across the street, with a well-coiffed reporter on an impossibly sunny day mercifully not realizing that the shrunken, shriveled woman in a 12 year old boy’s sweatshirt, staggering through the parking lot looking for refuge, for any car to sweep her up in, was the prey she’d been stalking all day.

The reporter didn’t realize that this was the broken woman who had told her kids to go ahead and play in the rain. Who had warned her kids about lightning and salmonella and sexual abuse and pornography and STD’s and bullying and collapsing tunnels of sand and snow, but who had never given the creek one single thought.

A woman who, while completely and utterly confident of her son’s immediate presence in the loving arms of the God of the Universe, would feel physical and mental anguish every moment of every day but most keenly when, at least 4 times every single day, she had to drive over the bridge where they found her little boy.
Share